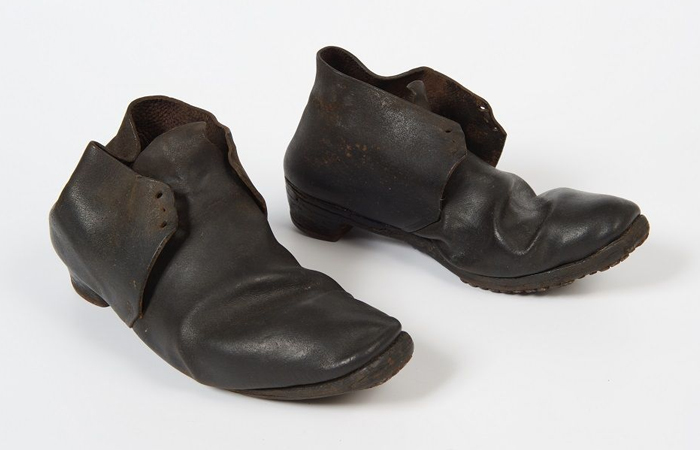 A pair of nineteenth-century men’s black leather ankle boots, found in 1939 under the floor of the old military prison in Weedon barracks, Northamptonshire. Northampton Museum.

‘I started work at Northampton Museum in the 1950s, and it was about 1957, in conversation with John Thornton, then head of the Boot and Shoe Department, Northampton College of Technology, that we realized simultaneously that the six or seven shoes we had each received for identification, found hidden in the fabric of assorted buildings, could not be coincidence…’.

This excerpt is from June Swann’s 1996 Costume paper ‘Shoes Concealed in Buildings’, and it was how Rebecca Shawcross, current senior shoe curator of Northampton Museum, introduced the Magic of Shoes workshop held on 22 September. Considering that June Swann actually initiated research into concealed shoes, it was only fitting that her story kicked off the session – and that she was sitting in the front row, contributing her invaluable insights throughout the afternoon.

The workshop, jointly organised by Northampton Museum and the University of Hertfordshire, was held in the beautiful neo-gothic Guildhall, the perfect setting for talking about the magic of shoes. It marked the completion of the digitization of the Concealed Shoes Index, which involved transferring all of the information from 2000+ handwritten index cards, one for every concealed shoe reported, into a spreadsheet to make the data more accessible. Rebecca detailed this process before introducing the first speaker.

Jeremy Harte, curator of the Bourne Hall Museum, started the afternoon off with storytelling panache, giving a talk on ‘Foot Notes: The Legendary Lore of Boots and Shoes’. He took us on a fascinating tour through the rich corpus of footwear-centric fairy tales, demonstrating how ‘bad things happen with shoes’, from the Red Shoes to the red-hot shoes Snow White’s stepmother danced to death in. Shoes do, after all, have a history of being used as torture instruments. But tales such as Cinderella and Puss in Boots shift the focus from dangerous to desirable footwear, with the ‘glass slipper’ symbolizing the heroine’s liberty and the boots empowering Puss by emphasising his masculinity. 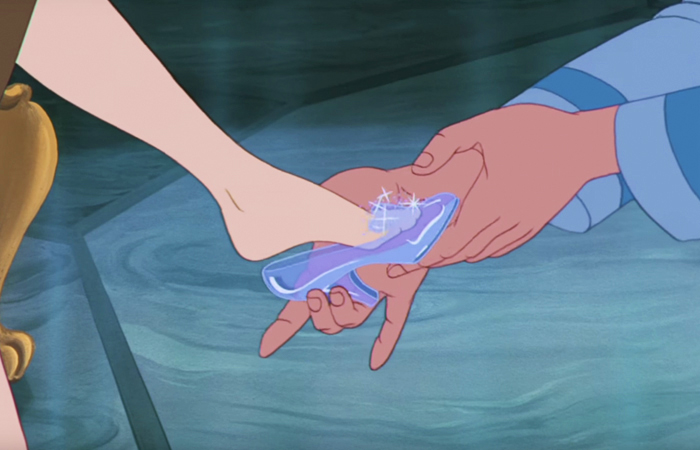 The glass slipper is placed on Cinderella’s foot in Disney’s 1950 version of the fairy tale.

Carol van Driel-Murray travelled all the way from Leiden University to deliver the second talk, ‘Magic Below Ground: Concealed Shoes in Prehistoric and Roman Times’. Carol eloquently described the awe most people feel at seeing the footprint of somebody who lived 2000 years ago and the way many hearts melt at the tiny children’s shoes found at Vindolanda. Shoes are very personal items and through the footprints they contain we’re given a valuable connection to the past. So what can we tell about people from prehistory and Roman times by their shoes? Carol explored these questions by drawing on the archaeological evidence, from the many mysterious single shoes found at the bottom of Roman wells to the nailing patterns on the soles of shoes possibly designed to leave messages in the dust or sand.

I delivered the third paper, ‘The Concealed Revealed: Seeking Answers in Northampton Museum’s Index of Concealed Shoes’. In preparation for my talk, I delved into the recently digitized Concealed Shoe Index, which holds records of almost 3000 concealed shoes. What light can this data shed on the enigmatic custom of concealment? Some questions can be answered: where is the most common location for concealed shoes (chimney); which areas in Britain have the most finds (south-east England); and what types of shoes are found (a fairly equal amount between men, women and children). But the data also raises a lot of questions, and still does not give us the answer to that tantalising question: why did so many people hide shoes within the fabric of their homes?

We broke for refreshments before the final talk, and it was during this time that the audience could take a look at the concealed shoes on display – and present some of their own. One couple had brought with them a child’s shoe that had been found within the wall of their outbuilding. They plan on returning the shoe to its found location, but behind a glass pane so that it can be seen. And a woman presented a particularly curious find: a tiny wooden model of a shoe found up her chimney in Oxon. Clearly new finds are being made all the time. 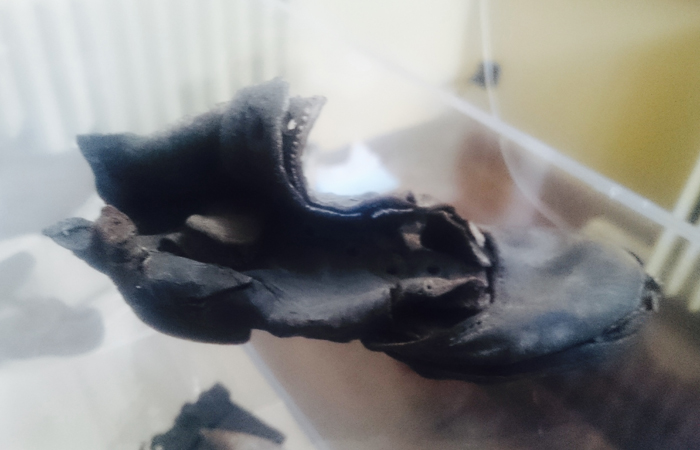 A child’s shoe found concealed in the wall of an outbuilding on display at the workshop. Photo: Author.

The project’s own Owen Davies, also from the University of Hertfordshire, gave the concluding talk, shifting the focus from shoes to feet. Owen asked us to consider whether it was the shoe or the foot that was important in the custom of shoe concealment. After all, feet do feature prominently in magic and rituals. Via sympathetic magic, for example, a person is connected to their footprint; if someone damages the footprint then they also harm the person. So perhaps it’s the foot rather than the shoe that’s significant. But if this is the case then why are so few concealed socks found? Surely socks evoke a similar connection to a person’s foot. Owen also pointed out that hands actually have greater association with protection and healing than feet do, and yet there are far fewer concealed gloves than shoes. So many intriguing questions. 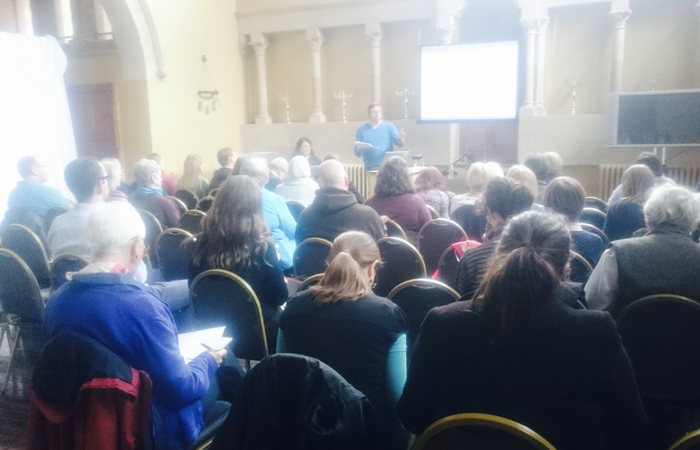 Owen considers the relationship between shoes and feet in the concluding paper. Photo: Author.

You’ll no doubt have noticed that the Magic of Shoes workshop gave us far more questions than answers – but what fascinating questions they are! And hopefully with the recently digitized index and the new finds being discovered all the time, we can continue exploring them. You can explore some concealed shoes in our growing online catalogue on Historypin.

3 responses to “Getting the Boot: The Magic of Shoes Workshop with Northampton Museum”